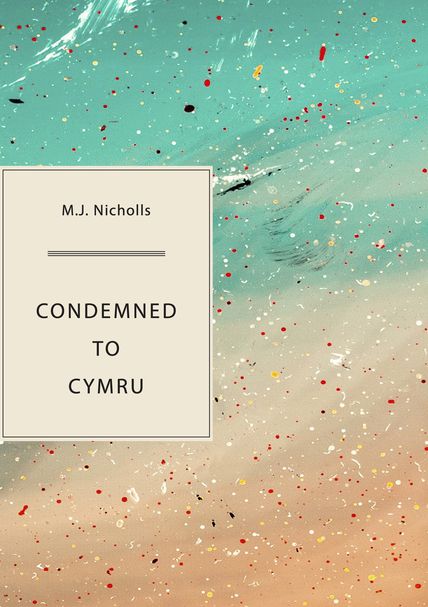 At the Husavík Research Institute, a paradise of Nordic perfection where the blemished are banished and the pretty are promoted, acne-ridden Magnus is sent on a bogus anthropological fact-finding mission to visit every village, town, and city in Wales to file “reports” for Iceland’s upcoming colonisation. The reports he composes are fragments of snarky travelogue, highly suspicious tales of local folklore, unforgiving recaps of childhood trauma, and cris de coeur from a misanthropic outsider fated to stalk the wild Welsh countryside suffering squeamish erotic reveries about Helga Horsedóttir. Presented in alphabetical, achronological order, Condemned to Cymru is a comico-pimply picaresque, a digressive ramble into the dark heart of boredom, and the essential reference encyclopedia of self-hatred.

“Here’s a promise: the latest from M.J. Nicholls is like nothing you’ve ever read before. Set in an era of mass irradiation, Condemned to Cymru will be a big fat Quantum IV-level zit right on the nose of your otherwise airbrushed, plastically perfected reading list. Lean in and pop this sucker. Send a portentous pus of futuristic archaicisms and gorgeous grotesquerie dripping down the bathroom mirror. You’ll never reflect on the possibilities of fiction the same.”

—Dan Tremaglio, author of Half an Arc & Artifacts & Then the Other Half

“M.J. Nicholls’ new novel Condemned to Cymru is Rabelaisian in every sense of the word: it’s gross, it’s droll, there’s sex and violence and jokes. It even affects the Rabelaisian flourish of an artificial structure—the story is mostly presented as one pathetic misanthrope’s alphabetized travelogue (of sorts) of Wales, written for a sinister Icelandic thinktank bent on world domination. And much like Rabelais, beneath all the playful language and grotesqueries is a story concerned with people, society, suffering, and justice (or the lack thereof)… [T]his book is a tremendous amount of fun, and even the bleakest parts have a core of playfulness to them. M.J. Nicholls has written a clever, surprising story, equal parts funny and despairing, sharp enough to keep you reading a literal alphabetical list of Welsh towns, parsing a tangled story overheard in a pub for deeper meanings, or trying to find the metacommentary behind a giant rampaging buttocks smashing the local sheep to smithereens.”