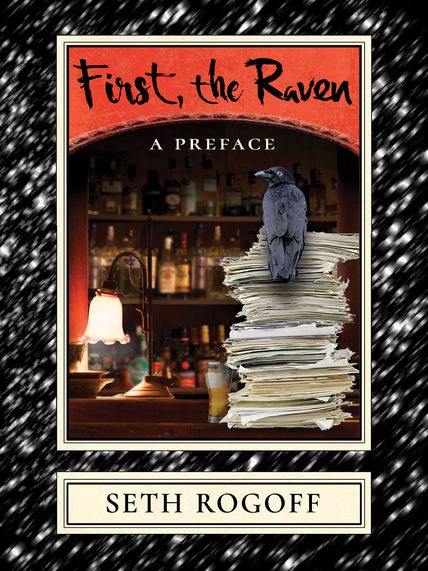 Sy Kirschbaum has spent almost twenty years in Prague translating legendary Czech dissident Jan Horak’s samizdat masterpiece, Blue, Red, Gray. On the cusp of finishing, he is called back to his Maine hometown to see his troubled former lover, Ida Fields, now the wife of their childhood friend Gabe Slatky. But before he can see her, Sy must meet with Gabe for an evening at a local bar, an encounter that becomes a test of their old friendship and their dueling accounts of reality. In the conversation that follows, narratives of past and present—of art and life—interweave with perfect inevitability, yet with unpredictable, even shocking consequences, spiraling Sy and Gabe into confusion, doubt, and despair, without quite eroding, perhaps, the possibility of hope.

First, the Raven: A Preface is a quietly yet profoundly radical work, as ingenious as a print by Escher or a Möbius strip: the Reader must glide along its whole immaculately ramified length before realizing how deeply life, despite its unceasing, nearly flawless appearance of normalcy, is upside down.

“Seth Rogoff’s unconventional novel, First, the Raven: A Preface, proves highly innovative in its conceit and almost impossibly perfect in its execution. This is a tale of confined spaces and psychological discomfort—a rendezvous, after nearly twenty years, between translator Sy Kirschbaum and playwright Gabe Slatky inside a downscale Maine bar during a blizzard. Kirschbaum, who has devoted his adult life to translating an epic Czech novel, has been summoned back to his New England hometown by his former lover, Ida, who is also Slatky’s wife and muse. As the two men engage in a raw, emotional pas de deux, we are swept into a world of lost time and fleeting hope. If any literary endeavor could stand at the nexus of My Dinner With Andre and The Iceman Cometh, this is the work. Although the influences are Bellow and Roth—diluted with a chaser of Kafka—the final product is decidedly an American original. First, the Raven runs broad and deep; it is an intelligent and inventive introduction to a voice of extraordinary power and promise.”

—Jacob M. Appel, author of Einstein’s Beach House and The Mask of Sanity

“This dreamlike book, inspired by Kafka’s but also Havel’s city of Prague, creates a separate universe following its own laws, an enchanted island. The narrative is all at once intensely personal and historical, playfully esoteric and resolutely seducing.”

—Joshua Cohen, author of Book of Numbers and Moving Kings

“First, the Raven is cleverly and forcefully narrated in a succession of monologues that take us to communist Prague, avant-garde Paris, and the mysticism of 19th century Germany. The history lesson of the Czech banned writer is conveyed with persistence reminiscent of Philip Roth. Central European authors Franz Kafka and Sándor Márai are echoed in this urgent and beautifully written prose.”

“Seth Rogoff’s First, the Raven is mesmerizing. The many-layered narrative takes us from The Battle of Piave to The Velvet Revolution as we explore the roles of historian, witness, and artist in the slaughterhouse of 20th Century Europe. The magic of the story is that it unfolds against a simple evening in a hockey bar in Maine where the cinematic battle between good and evil resolves in a kind of threadbare Chekhovian despair. First, the Raven is a brilliant and inspired work of fiction—both a profound novel of ideas and an elegant piece of storytelling.”

—Michael Dahlie, author of The Best of Youth and A Gentleman’s Guide to Graceful Living

“Seth Rogoff is one of the most beguiling writers I have read in a long time. He needs to be because very little in First, the Raven (a reference to the raven sent out of the ark by Noah) is as it appears…. Rogoff’s book shimmers in the reflections of all its levels and subplots, some of them only ever dimly seen. His command of all the intricacies he has created is dazzling…. Beautifully designed in a small format, First, the Raven is a fascinating and impressive first novel.”