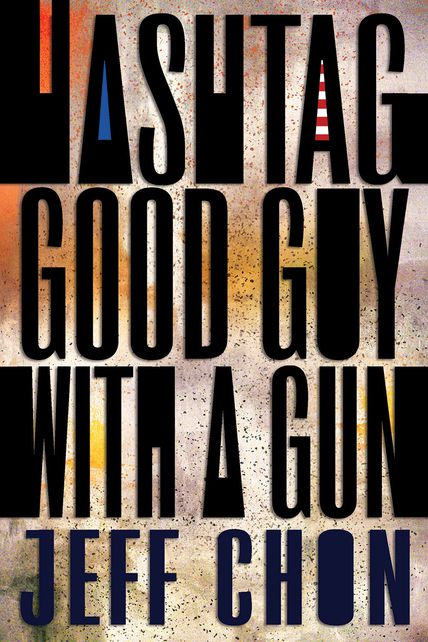 Four days before the 2016 Presidential Election, disgraced teacher Scott Bonneville foils a mass shooting at the Pizza Galley Family Fun Center by shooting the would-be perpetrator. He is hailed as a hero, but what the public doesn’t know is that Bonneville walked into Pizza Galley with violent intentions of his own, nurtured by urban myths, conspiracy theories, and deep-seated delusions. Meanwhile, his former student Blake Mesman, inspired by Catcher in the Rye and a not-so-secret brotherhood of aspiring alpha males, reshapes himself into the man he always felt he should be and embarks on his own journey of destruction.

A black-hearted satire of our new reality, Hashtag Good Guy With a Gun tells a story of the real carnage of Trump’s America: guns, the toxic radicalization of young men, fake news, the endless anger and resentment we feel towards one another, spirits broken by a world we refuse to acknowledge as of our own making, and how we convince ourselves of horrible absurdities, rather than face something even more disturbing: our own essential truth.

The author writes about the book’s genesis and context and on the timeliness of literature in Maudlin House: Too Soon is Now. Jason Teal interviews Jeff Chon about the novel in Vol1 Brooklyn, and Alice Stephens interviews him for Bloom.

“A very funny book about conspiracy theories, masculinity and the internet.”

“The central themes of Jeff Chon’s Hashtag Good Guy With a Gun are captured in its title: social media, masculinity and violence. Its knotty plot is Pynchonesque in its implausibility and its characters’ motivations are often obscure, even to themselves. The deadpan tone is reminiscent of David Foster Wallace in his bleaker moments…. Along with estrangement and hate, Chon offers points of connection to suggest that the US is not quite as fragmented as it seems. Stories from a range of cultures are woven into the narrative, underlining the country’s genuine diversity. Korean American culture plays a central role…. Like the myriad theories, myths and ideologies that congest the internet, Hashtag Good Guy With a Gun’s narrative blend of real and imaginary events, contradictory perspectives and characters can be difficult to follow. But it is nevertheless a compelling and unsettling novel that explores the Trump era with considerable insight and wit.”

“Chon’s characters—mostly young men, mostly broken in small, telling ways—inhabit a crepuscular universe of marathon porn-watching sessions and gym-buffed inadequacy, where dark conspiracies circulate on bilgey internet forums. Wacky theories about J. D. Salinger, MK-Ultra and big finance are passed under the table; guns are dealt like playing cards. It is the most successful novel I’ve yet read of the Incel generation. And most impressively, Chon makes you care about these damaged, dangerous lost boys…. America over the last five years has resembled a man in a barrel hurtling over Niagara Falls: boy, has it been a rush, but at times it has looked terminal. What Chon has achieved, therefore, in Hashtag Good Guy with a Gun is fairly remarkable. It gives us no pat solutions to America’s Gun problem or its Angry Young Men problem or its Angry Young Men with Guns problem, but it tackles these topics with fluency, wit and a dancing, stinging charm. It’s a deeply humane book about our inhumane times.”

—Alex Diggins, in 3:AM Magazine

“Timeless…. Shockingly mirthful. Ambitiously essential. Wildly quotable. Jeff Chon has given us a novel that must be consumed for our own sake. This black-hearted satire is the kind of novel that most dream they can write. For now, we can at least just read it and marvel at how hysterically nervy Jeff Chon can be.”

“A biting satire of toxic masculinity in today’s America, as well as a scathing critique of American attitudes regarding gun violence, racism, homelessness, social media virtue signaling, and everything else. And it does it damn well.”

“Chon’s punchy, acerbic prose weaves these people and narratives together, skipping backwards and forwards in time. The result is a chain of angst and aggression that seems unbreakable, in which bloodshed only begets more bloodshed. He depicts a world spinning out of control…. Eschewing easy sympathy and tidy resolutions to its dilemmas, Hashtag Good Guy with a Gun is a bracing, affecting novel that laments a society on the edge of madness.”

“Engaging and entertaining. The author has struck a fine balance between depicting a brand of masculinity as performatively toxic alongside revealing the innate personal anxieties such beliefs mask. An original take-down of contemporary issues where underlying causes are too often dismissed as unworthy of attention. A story that stands on its dark humour as well as literary merits, but which offers more for those willing to question why men such as these feel so desperately hard done by.”

“As Chon writes: ‘That’s the problem with logic in an age of foolishness, [it makes] us lose all sense of perspective.’ Chon is the court jester here in Hashtag Good Guy With a Gun, accusing us all … of losing our perspective. That’s a tame way of putting it: America is the shithole country that Trump tried to scare us about. And that’s why Hashtag Good Guy With a Gun is a very American novel…. Chon’s style is clever and funny, filled with pop culture references, and urban myths like: Was Mr. Rogers really a marine sniper? Was Captain Kangaroo really a marine sergeant in the assault on Iwo Jima? … Hashtag Good Guy With a Gun is so good that one forgets it’s out through a small independent publisher…. Credit’s due to Sagging Meniscus Press for putting it out, but woe to all of us readers who may be missing out on all kinds of great novels because we’ve simply never seen them on the front tables of bookstores.”

“While this biting satire is based in Oregon it could be anyway. And like all good satire this novel comes from a very dark place—a generation of disenfranchised, drugged-up young men with bleak futures and a penchant for violence. Chon has much to say about race, religion, the proliferation of America’s trigger-happys and even Salinger’s Catcher in the Rye in a novel that scares you even as it makes you howl. Clever, wry and brilliant.”

—Anne Cunningham, in the Meath Chronicle

“Chon takes us into the dark heart of toxic masculinity, fake news, radicalisation and the culture that social media has shaped from them. Thoughtful, but fast-moving and laced with biting wit, it’s an offbeat satire on the cultish, fragmented realities that have come to define the USA, particularly the young men swept up by incel culture.”

“The way the story is told is as fascinating as the topics it covers…. Each time we revisit the story, we have more information. The narrative moves on, and we know more about the characters; but until the end, we cannot be sure what exactly happened because we were not there and can only go by what others have witnessed…. masterful.”

“This is not a story that we can safely watch from afar, a story with a clear beginning and end. Hashtag Good Guy with a Gun is a book about young, lonely men turned into dark, angry souls by the rot of the internet, the same internet that we use to work, read news, and shop every day. And Chon’s manner of writing about such men is not intended to turn them into captured, detached objects that the reader can observe from safe distance; instead, he molds the story using the very codes and currencies that manufacture that rot, rendering its toxic environment inescapable. They live among us, and we among them.”

“This book is great fun, I laughed so much at the way each situation was played out and blown out of all proportion on social media…. It doesn’t matter what your opinion is of the characters here and what they’ve done in the book, Chon shares with you how they got to that point and leaves you wondering that if they got help would things have been different?”

“The whole book makes readers feel complicit in the hurt, bigotry, and violence that happen throughout the story—and it all feels so familiar as we reflect on recent history…. [It is] one of the most well-thought-out books I’ve read in a long time.”

“A literary snapshot of the kinds of behavior that accompany the political turbulence that Trump seemed to foment, while also revealing in the attitudes of its cast of characters that the genesis of such turbulence derives not from Trump himself but from already turbulent currents roiling through American culture.”

“Unlike the dichotomous model of trees, rhizomatic plants and fungus grow in all directions with no central point…. Jeff Chon’s debut novel, Hashtag Good Guy With a Gun, applies the rhizomatic model to our conspiratorial age…. Chon brings this concept to life stylistically, circling the incident at the restaurant and providing glimpses into every occurrence and character which played some role in it, no matter how tangential. Hashtag Good Guy With a Gun comes to represent its own interlinked structure. The narrative is not linear. There is no present per se, just a series of scenes before, during and after the precipitating event. Vignettes presented out of order, and themselves prone to flashing back to some previous scene or revealing an as yet unrealised future. A story, for all of its male vanity and violent fervour, with no final villain or point of blame.”

“A boots-on-the-ground dispatch from the suburban wastelands of Incel-vania (population: you), all told in the shadow of the Korean grim reaper. James Ellroy said noir is the genre of male self-pity, but there’s nothing to pity here in Chon’s smart, cogent, and morbidly comedic exploration of men’s breaking points. Ambitious, gripping, and snickeringly quotable.”

“Hashtag Good Guy with a Gun is one of the boldest, smartest, and weirdest books I’ve read in years. I haven’t seen anyone, anywhere, write so expertly, clearly, and empathetically about the ways online culture is wrecking young men. Jeff Chon pulls off a remarkable feat in this novel, tackling dark and frightening subject matter in a way that never feels overbearing or preachy. Plus, it’s funny.”

—Tom McAllister, author of How to Be Safe

“Hashtag Good Guy with a Gun is a rhizomatic literary thriller with bursts of Robert Anton Wilson’s cosmic comedy and sparks of Conrad’s darkness. Chon’s carefully crafted characters are the purple-hearted veterans of the culture wars, the feral philosophers and cagey sages of a post-truth #world. This is a nervy novel that will simultaneously frighten and delight.”

“Jeff Chon’s wide-ranging debut takes us deep down the rabbit hole. Chon’s web of characters seek meaning in the everyday as the chaos of our media-saturated world swirls around them. Hashtag Good Guy with a Gun bursts with humor, feeling, and timely commentary. Chon is an author you’ll want to follow.”