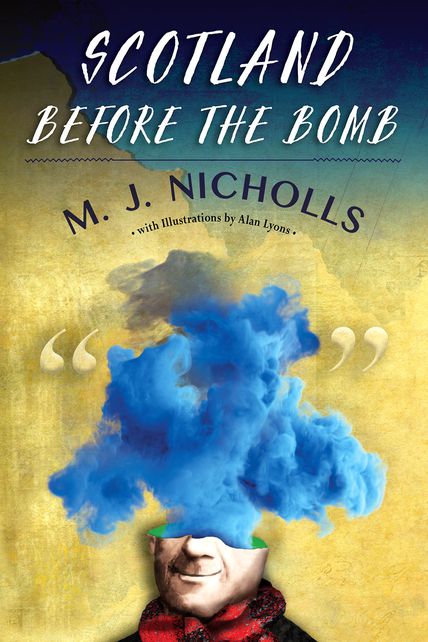 In 2060, Scotland was annihilated in a series of merciless nuclear strikes from Luxembourg. In response to a curious public’s growing hunger for a definitive history of the long-lost nation, M.J. Nicholls provides the most complete account available of Scottish life starting with the failed independence referendum of 2014. Reflecting how 21st-century Scotland split into numerous nation-states with radically different societies and systems of government, this work of painstaking research and archivism is divided into chapters corresponding with those several regions, whose fates, though ultimately conjoined in irreversible darkness, took divergent paths to the inevitable during the brief but colorful period of Scotland’s ill-fated fling with freedom. This volume will unearth the enigma that was Scotland before the bomb.

Listen to Scots Whay Hae!’s audio interview with the author about the book here.

“There is no more difficult task for a writer than a comic novel. An epic poem is nothing compared to it. Many have tried, most have failed. P.G. Wodehouse made it look so easy for so long that Evelyn Waugh called him not merely the greatest humorist, or the greatest comic novelist, but the greatest writer of the 20th century. Let that statement sink in for a bit. It is not nearly as ridiculous as it might seem at first glance. Then get a cold, damp cloth and mop your fevered brow, for you will need to have your wits about you when you dive into Scotland Before the Bomb by M.J. Nicholls. Open it anywhere. I defy you to find a page without laughter in it, and what’s more, laughter that resonates. This is without question the comic novel of the year, quite possibly the decade. It is humor on a grand scale, and also humor down to the tiniest, most absurd, radioactive details. Nicholls employs a fiendishly clever premise straight out of Borges by way of Spike Milligan—a novel disguised as post-apocalyptic reportage—to send up almost every current hallucination and article of faith held dear by the citizens of his beloved, bedeviled homeland, not to mention greater Europe. Like every significant work of art, this one is very much of its time while also being carefully crafted to last into a different, and one hopes better, era.”

“There’re heaping helpings of dystopia and absurdity in M.J. Nicholls’s Scotland before the Bomb, a sprawling chronicle in which a Scottish independence vote fractured the country into dozens of tiny nation states. Presented in the form of archived entries compiled by a researcher from the twenty-second century, each of the book’s entries documents the rise and fall of the nations. Rampantly imaginative, the book pokes fun at every sort of human folly and hubris…. a linguistically acrobatic novel that’s filled with zany wit and sheer randomness.”

“Packed with everything from bogus Trip Advisor reviews to memoirs, interviews, haikus and a densely-packed seven-page list of reasons to be miserable, Nicholls’ latest is an impressive outpouring of imaginative, seemingly inexhaustible absurdity pitched somewhere between Alasdair Gray and Spike Milligan.”

“If his previous novels put a wry smile on your face, Scotland Before The Bomb will have you laughing out loud. At times it’s Jerry Seinfeld meets Laurence Sterne meets Kathy Acker, at others it’s like Samuel Beckett’s Alice in Wonderland…. Scotland Before The Bomb is that rarest of literary beasts—a satirical, witty, and considered comic novel which is deadly serious at its core…. [It’s] unlike any other novel you’ll have read before unless you have read M.J. Nicholls. And if you haven’t you absolutely should. He could just be your new favourite writer—you just don’t know it yet.”

“Over the last five years, Scots writer Mark Nicholls has published five novels that establish him as one of the best comic postmodernists of our day. Like the late, great Gilbert Sorrentino, he is a grandmaster of sardonic humor, a superb mimic of various literary forms, and a stylist in full command of the entire range and resources of the English language…. A goofy gazetteer, Scotland Before the Bomb evokes other novels in the travelogue mode, from the sublime (Gilbert Sorrentino’s The Sky Changes, Italo Calvino’s Invisible Cities) to the ridiculous (Chandler Brossard’s Postcards, Michael Martone’s The Blue Guide to Indiana). Scotland does indeed deserve bombing if readers there remain unaware they are harboring one of the funniest, most inventive writers living.”