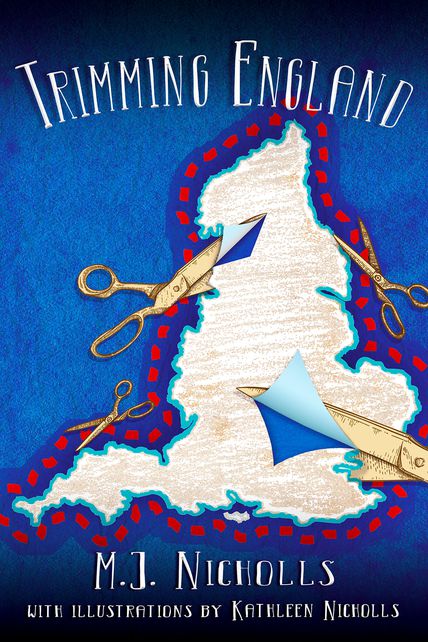 M.J. Nicholls’ path-breaking new book is a stark and uncompromising account of the bizarre and regrettable period when the British government set about trimming England. In 2021, British Prime Minister Frank Oakface elected to rid each English county of its most irritating citizen, deporting them for a period of incarceration in Jersey’s one-star Hotel Diabolique. From a ticket inspector whose sudden lust for zydeco music ruins his marriage, to a blogger who hangs around supermarkets seeking sympathy by the bananas, to a teacher who lobotomises an entire classroom to improve her son’s life chances, Nicholls’ fearless reportage brings together the riveting stories of these hapless discards into an ebullient and swashbuckling satire of our contemporary predicament.

“M.J. Nicholls’ latest book, Trimming England, shows an alternate world where the population is slowly whittled away. The Prime Minister asks each county to nominate someone to be sent to a one-star hotel in Jersey. Thus begins Nicholl’s chronicling of the absolute worst that England has to offer…. Each chapter varies so much from the last that it’s almost like opening a random Christmas present, never quite sure what the next one will be…. For ambition and execution alone, it’s something special. It’s easy to pick up, dip in and out of and find something to admire. Nicholl’s has a unique style and ambition that may not work for every reader, but those who resonate with it will love it and hold it close as they beg not to be sent to Jersey.”

“M. J. Nicholls is a Jazz-Man Word-Smith or a Word-Smith Jazz-Man or a Jazz-Word Smith-Man…one of those at least, he has a unique way with words, he’ll use words that surely do not exist so you google them and yes ‘Bummershoot’ is a word (even though Microsoft refuse to admit that and have done a red squiggle) and it is a word I shall be using whenever I can. He’ll reuse/rephrase words in a sentence and it gives the paragraphs (some rather long) a certain beat and that’s where the Jazz feeling comes in, you find yourself getting lost in the flow and really enjoying what he has conjured up…. If you’re ok with letting go of reality for a bit then you’re going to get quite a few laughs from this.”

“Dark days call for dark comedy and M.J. Nicholls, author of Scotland After the Bomb, has risen to the challenge with this satire that’s so funny it could find you forcibly ejected from public transport, should you be brave enough to read it on the bus…. This is true inventive comedy by an author who can stretch language like an elastic band. Nicholls’ underlying themes are actually far from funny, but, like Frank Carson, it’s the way he tells ‘em. And in the telling he makes us laugh lest we should cry.”

—Anne Cunningham, in the Meath Chronicle

“Trimming England, M.J. Nicholls’ latest work of satire, is a brilliant piece of character work…. I found myself marveling at Nicholls’ ability to assume new voices so wholeheartedly…. It’s best not to read the entire book in one sitting (though you easily could); while there are highs of laughter and utter absurdity, there are just as many moments of exhaustive recognition that lead to, in my case at least, staring blankly at a wall (or out at the ocean, when available) to process the plight of society. This should be a point of pride for Nicholls; Trimming England resonates with biting accuracy.”

“A monument to the bizarre…. the landscape of Trimming England is so well defined and consistently wound into the fabric of each mini-narrative that immersion comes naturally. Indeed, the episodic nature of the book, coupled with its quirky tangents and playful dialogues brings to mind John Kennedy Toole’s A Confederacy of Dunces. As in Toole’s satirical novel, Trimming England is not just a showcase of strange ‘irritants,’ it’s also the documentation of a society. For Toole, the society is New Orleans. For Nicholls, it’s England. And for all its absurdity and inventiveness, there is, in a way, a quaint Englishness to many of the characters and their stories, underdogs struggling against the wrath of mundanity. Trimming England presents the reader with a world that is both incredibly strange and all too familiar. The novel’s imaginative premise is its initial draw, but its cast of characters will take you to the end. One after another, these 47 prisoners keep the reader’s attention with their mannerisms and reasoning on subjects that combine the unusual with the everyday….Was Nicholls the 48th condemned irritant? If so, through writing this book, he has more than repaid his debt to society.”

“A tour de force of creative and satirical imagination. [Some chapters] had me almost crying with laughter…. But behind the wit and humour I extracted a more serious intent—a satirical and perceptive observation of our society…. There is an absurdity to some of the unlikely situations but sometimes the absurd gets closer to the truth than the truth itself….”