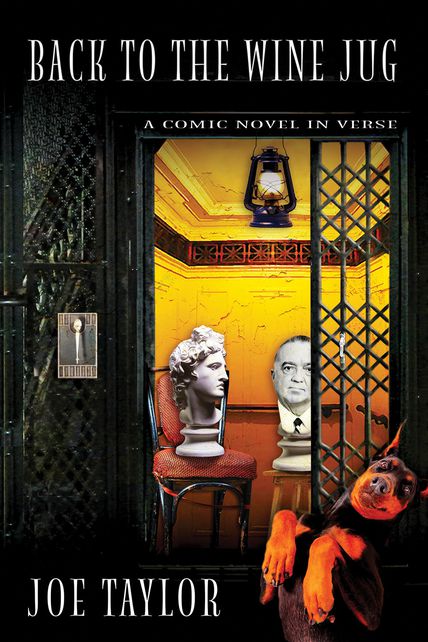 In Back to the Wine Jug, Joe Taylor, author of the comic verse novel Pineapple, returns to the form with a tour de force of wit, erudition, and earthy imagination.

Dateline: Hades, the Underworld, where things go bad. But things are going even worse up top with red/blue states, Brexit, the Middle East, Hong Kong, and college football. Diogenes, still toting his lantern in search of one honest (wo)man, is appointed by Lord Hades himself to teleport up to lovely Birmingham, Alabama, and mollify mundial matters, accompanied by his Doberman Pluto and Victoria Woodhull, the suffragette and 1872 presidential candidate. The trio is on the case to right the world’s confusion. But, Lord H. being a consomméed plot-thickener, they find themselves followed in the transporter by commie-hating troublemaker J. Edgar Hoover….

“In Back to the Wine Jug, Joe Taylor once again proves he’s a master of the comic-novel-in-verse form. (What? You haven’t yet read Wine Jug’s precursor, Pineapple? Hop to!) This time out, in a ‘universe ruled by flaw,’ peopled by the ‘survival of the mostly fit,’ Diogenes beams up from Hades, once again on the hunt for an honest being—a task made even tougher in the era of ‘Let America Hate Again.’ (Does Dio meet with success? Hint: ‘It’s not over until the fat angel rings.’) Make no mistake, Taylor employs linguistic virtuosity and comedic camp to achieve more than yuks here. Reading this book will make you laugh, for sure, but its incisive commentary on our chaotic present will also make you think.”