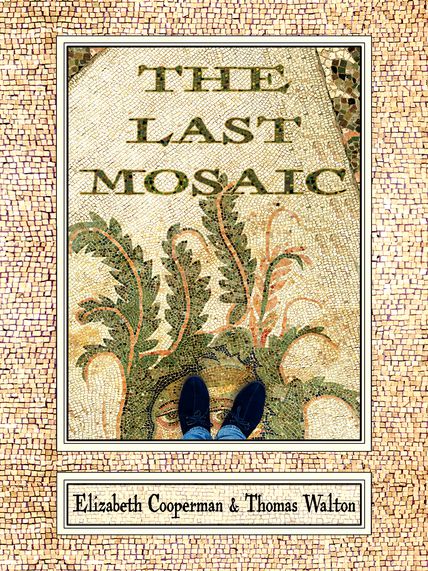 Haunted by three thousand years of artists who made pilgrimage to the Eternal City, collaborators Elizabeth Cooperman and Thomas Walton gather impressions from the ruinous streets in and around Rome. The result is a literary mosaic that aligns itself with the ecstatic baroque of Bernini, the concentrated vision of Caravaggio, and the sublime uncertainty of Keats, as it resists the forces of “another dark age.”

Dazzling with image and anecdote, with comedy and cobblestones, with headless statues and the bright robes of street performers, with shadow and cicada and shock of light, The Last Mosaic is an aesthetic call to arms to “listen,” a battle cry to “be impressed,” and a plea to “get lost.”

“Most current discussion in American literary culture regarding fragmentation, collage, bricolage, braided narrative, etc. is blinkered by the illusion that these are uniquely contemporary gestures, but they go back to at least Heraclitus and probably to the first human who etched a list of words on stone and, for poetic effect, forgot to complete the list. To be human is to be broken. The Last Mosaic not only explains these ideas; it embodies them. It’s also extremely vivid, precise, smart, and galvanizing. ‘With great art there’s nothing that can prepare you for the thing you’re about to see.’ "

—David Shields, author of Other People: Takes and Mistakes

“In this tessellated text we encounter a fractal poetics: juxtaposing witticisms and vignettes that illuminate Roman art and culture, the authors reveal, ‘when you look close enough, there’s nothing that isn’t a cracked assemblage.’ Whether we’re peering at the strokes on a Caravaggio, excavating cobblestones, or looking more broadly at cities, travel, partnership, and time, we see that life is a series of shards that come together. A fragmented travelogue, The Last Mosaic musters art history, mythology, etymology, poetry, and humor, summoning the ghosts of Shelley, Keats, Giotto, Nero, and their kindred to a museum whose vivid lines resonate like the cicada’s song.”

“’A fragment defies the mind’s impulse to make things whole. Defies it, and entices it,’ and from just such fragments, Elizabeth Cooperman and Thomas Walton cobble together a hybrid work—parts travel journal, memoir, lyric essay, and prose poem. The authors take Rome as their muse, exploring its history, art, architecture, and famous dead to create a new palimpsestic work that enriches the bounty that Rome has inspired…. The book can be read as a series of poems or as a number of vignettes. But it is perhaps most useful to consider it by its own terms: as fragments that are beautiful in and of themselves, and which also function as a sum greater than its parts.”

“Mosaic is a tiny book—it slides comfortably into the back pocket of your most comfortable pair of jeans, with room for a pack of gum left over—and it’s deceptively easy to read. You could whip through it over a solo dinner at your favorite Italian restaurant, but you’d be wise to let the book breathe a bit, to allow your mind time and space to wander, the way Walton and Cooperman did. It’s easy to be dazzled by all the shiny fragments, but when you back up and admire Mosaic from a distance, you can see the narrative take shape. An argument forms, and the readers begin to understand what the authors discovered on their trip…. As a mimicry of the traveling mindset, I’ve never seen anything quite like Mosaic. It dissembles the traditional travel narrative and then reinforces it by encouraging the reader to fill in the narrative around the images and scholarship shards. Reading the non-book in the mortar lines between each fragment is far more rewarding than most travel books could ever hope to be.”

—Paul Constant, in The Seattle Review of Books

“The Last Mosaic is a collection of poetic statements and musing describing travels in Rome by poet-authors Elizabeth Cooperman and Thomas Walton. This collection is the first major collaboration between these two poets, and one that sticks timely as a footnote (or page rip or cobblestone trip) in the long history of representation of humankind. Like Anne Carson or David Shields (both who literally show up in the book in various ways, along with countless other authors and inspiring minds), the words in The Last Mosaic are loosely clumped into a scattering of ideas, linked together loosely into themes.

“In other words, the poems (or sub-collections) serve as clusters of revelation and insight and ultimately as documentation of Cooperman and Walton’s witness and conclusion during their time in Italy. The words, then, serve to help the reader navigate the behemoth of consequence and history consistently present throughout the Rome and its surroundings. The book’s a marvelous feat, one that swirls around mystically and temporally. It is filled with context and subtext, direction and flotation, movement and stasis, evidence and obscurity.”

“This beautiful text is at once paradoxically fragmented and flowing, like language itself. We are assured, ‘the brain will make up a coherent story instantly from seemingly disparate information,’ yet The Last Mosaic’s disparate epiphanies are juxtaposed in such a way that we feel their creator’s hands and minds at work. Interjections—communication fighting against itself—become our experience of life that is both lofty and vulgar…. We start our journey with getting lost and end with, ‘It’s best not to find the thing you’re looking for.’ Readers might just be surprised, however, to find just what they were looking for in this dense, yet airy, mosaic of a book.”

“One can correlate the sense of (a crumbling) permanence of an ancient mosaic on a wall or floor to this book in hand, flipped through again and again, entered at various places, eventually placed on a table, landing in a bookshelf, pulled out again and perused by a future reader. To appreciate a mosaic you don’t necessarily need to understand what lay behind it, or exactly when it was made or how it was constructed; the looking is enough…. This calling to and embodying of mosaics is perhaps best exemplified in the authors’ choice to never distinguish who, in fact, is speaking or writing. Conflating the narrator and author(s) is a reader’s natural tendency, but the beauty of this choice by the authors lies in forcing the reader to do away with that tendency; forcing the reader to take the text on its own terms, and consciously sever the desire to ascribe this moment to Cooperman or that moment to Walton…. One wonders, in fact, how Cooperman and Walton comprised the book. Were the moments between tildes written individually, and then put together, almost as a call and response? Were the authors prone to edit each other? Or, even further, did the authors write into each other’s lines? Do the authors even know, at this point, who wrote what? While surely the authors could answer these questions, the excitement lies in The Last Mosaic’s ability to, in fact, come off as mosaic while existing as written word. A third voice emerges: that of the mosaic.”

“Earlier, I described The Last Mosaic as a book of poetry, but that only captures part of what’s offered in this smart and tiny book. Some of the bursts that fill the pages are poetic verses inspired by the Eternal City. Others offer facts and artistic statements about the locations and artwork found there. It’s the odd and interesting offspring of a Lonely Planet guide to Rome and a chapbook, where all the elements combine to form a literary mosaic of facts, history, art criticism and poetry…. I read this book back in February before the coronavirus kept us indoors. Thinking back on it now, it’s a bittersweet reminder of life before the pandemic, when we were free to roam around cities and examine art and architecture in situ, rather than through a computer screen. I hope those days can return soon. Until then, you should read this book.”

On Cover to Cover with Jack Foley: (part one) (part two)