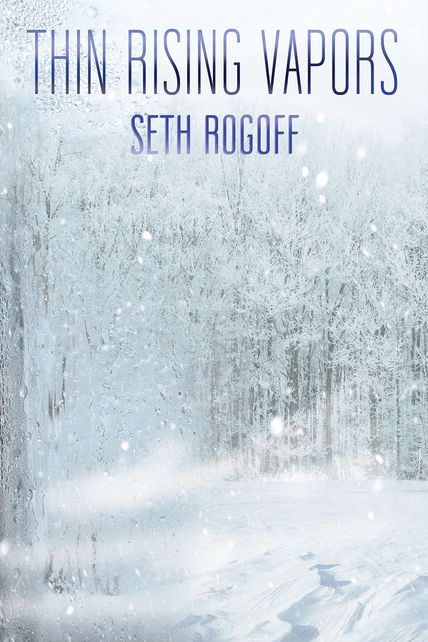 Thin Rising Vapors by Seth Rogoff (author of First, the Raven: A Preface) is a richly psychological novel about enduring yet fragile friendship and the allure of nature and faith.

Ezra Stern hasn’t seen his best friend from childhood and college in the six years since Abel suddenly quit a successful career in New York to live alone in a cabin in the Maine woods. In late November, Ezra receives a letter from an estate lawyer telling him that Abel has died and that he has inherited the deceased’s property in the lakeside town of Casco. That evening, as the first blizzard of the year approaches, Ezra leaves the city for Abel’s house. Over the next seven days, Ezra searches to understand his friend’s reclusive life and mysterious death by poring compulsively over Abel’s voluminous posthumous papers, typed on an old Remington manual. As Ezra becomes increasingly immersed in Abel’s writings, the coherence of the story of Abel’s life builds and disintegrates in successive swells. Ezra discovers in the center of what had been familiar something irremediably alien, and in the heart of that total otherness—the unbearably intimate.

Kenneth J. Pruitt’s fascinating interview with Seth Rogoff in The Rumpus deals extensively with the genesis of both this novel and First, the Raven.

“On the surface, Thin Rising Vapors is a meditation on the vicissitudes of friendship, but look more closely and you’ll see the novel’s true and remarkable nature begin to emerge. For Thin Rising Vapors is nothing short of a love letter from author to reader, and in Seth Rogoff’s capable, expert hands you’ll want to turn every page to find out what happens next until there aren’t any pages left to turn. In the vein of the audacious and tragic Into the Wild and with touches of the heartfelt mystery of Snow Falling on Cedars, Rogoff drops the reader in the middle of a snowy wood and then, like any good storyteller, slowly unravels how we came to be there and how the hell we’re going to escape.”

—David Samuel Levinson, author of Tell Me How This Ends Well

“Thin Rising Vapors is a wildly gripping meditation on friendship, memory, storytelling, and the elastic fluidity of time. Its world is so vivid and its characters’ relationships so extraordinarily real that when I reached the final page, I was shocked to look up and find myself in my own (sunny, humid) home, rather than surrounded by snow and curled up by a fire in Seth Rogoff’s Casco, Maine.”

—Allison Lynn, author of The Exiles and Now You See It

“Thin Rising Vapors is an electrifying novel—psychologically astute and richly textured, with an utterly distinctive voice. In the most seemingly effortless way, this novel manages to be a transfixing page-turner; a complex and fascinating meditation on friendship, trust and truth; and a searing look at the power of storytelling. Seth Rogoff is a thrillingly talented writer.”

—Molly Antopol, author of The UnAmericans

—Daniel Torday, author of The Last Flight of Poxl West

“Yet if Thin Rising Vapors is a novel of ideas, and a stimulating one at that, it also contains elements of a bildungsroman, albeit among the most intellectually challenging bildungsromane ever written…. If Rogoff’s first novel was periscopic, his second novel is impressively panoramic, as though Paul Auster had reimagined The Brothers Karamazov.

“Not all of the questions raised by Thin Rising Vapors, either factual or thematic, are answered in the text. Nevertheless, the novel’s conclusion proves highly satisfactory. Rogoff displays a notable gift for recognizing what to share and what to withhold, and precisely when in the narrative to do each—and therein lies the novel’s stirring magic. As Abel writes in one of his journal entries, ‘Too many perfectly fine moments are ruined by giving away the game. The unknown often needs to linger, like a fine spirit on the lips.’”

—Jacob M. Appel in The Collagist

“[An] important question that Thin Rising Vapors poses is that of the relationship between the author and the interpreter. In Rogoff’s novel it seems at first that Ezra is in charge of his narrative. He not only seems to control his actions, but he also decides what pieces of Abel’s papers are to be shown to the reader. But as the story proceeds, Abel’s voice grows more and more independent. His papers begin to occupy more and more pages in the book. Finally, it seems that Abel almost starts competing with Ezra for the role of the leading narrator. Soon his writings seem to be commenting on Ezra’s commentary. At the same time Ezra begins to think about his life in light of what he reads. He also begins to feel that he is losing control…. Rogoff’s strategy in portraying Abel’s solitary drama is to show it as the conflict between dimensions that are fundamentally at odds with each other: theory and practice, past and present, biology and soul.”

“Rogoff writes beautifully. I saw him read an excerpt of this book at the wonderful KGB Bar in the East Village a few months back, and it was a real treat to hear his sentences out loud. But while this book is well written, it initially frustrated me because I thought it raised a lot of questions that went unanswered. For example, Ezra becomes so overwhelmed by his grief and by the intensity of what he uncovers that he abandons his investigation….

“I thought about this book for a week, and couldn’t even start a new one while my mind chewed on it. What was Rogoff after here?… Maybe Rogoff is instead trying to warn us about the peril of choosing to be a political, intellectual or social hermit in this current climate. While it is tempting to want to just get away from Twitter trolls and all the horrible headlines about mass shootings and racism and all the other evils of the world and go live like Thoreau in the forest, … maybe that’s a path that leads to our death. I don’t know if this is right, but the more I think about it, the less frustrated I feel. Regardless, Rogoff has given me a lot to think about….”

“The mere act of reading the book gives pleasure, even when the story line is perplexing….

“While a snowstorm rages outside, what was meant to be an overnight stay in Prager’s unlit, unheated house is extended, day by day. Where in Rogoff’s other book, a blizzard contributed to its overall claustrophobia, here it poses an existentialist question: the elements that are snowing Ezra in, are they external or internal?… Back in Casco during the blizzard Ezra Stern developed a daily routine, which I recommend. Fetch the logs from the woodpile, light up the Franklin stove, pull up the rocking chair. Now savor the beguiling uncertainty of Thin Rising Vapors.”

“Rogoff casts his characters’ lives through the various looking glasses of memory, memoir, and myth until none of the characters—and least of all the reader—can be sure of the details, only their profound importance. The facts remain shrouded, but the consequences pierce the dark, loud as a loon’s call, shattering moments of quiet reflection and startling narrator and reader alike into new states of understanding. There is vanity in thinking one knows another person, and Ezra must confront the unrecognizable heart of his closest friend in order to discover a new and deeper intimacy. It is here, in the gap between objective and subjective, rational and intuitive, that subtler truths emerge.

“Such is Rogoff’s penchant for characterization that even inanimate objects in the cabin drip with personality: the Franklin stove Ezra feeds with the ritualistic attention of a priest every morning, the ghost-ridden Remington typewriter, an old Morehouse canoe paddle. Lovers, friends, shopkeepers, and long-dead relatives are all painted with attentive brushstrokes, endowed with the breath and vitality of a fully formed universe that continues to expand long after you put the book down.

“Some passages quiver with the nuanced terror of a Shirley Jackson story; others recall Camus as characters muse philosophically toward abstraction. But across every page flow the carefully crafted sentences of a letter written to a childhood friend, the kind of missive certain people might choose to type on an old Remington in the quiet solitude of a lakeside cabin.”